Extreme weather is upon us 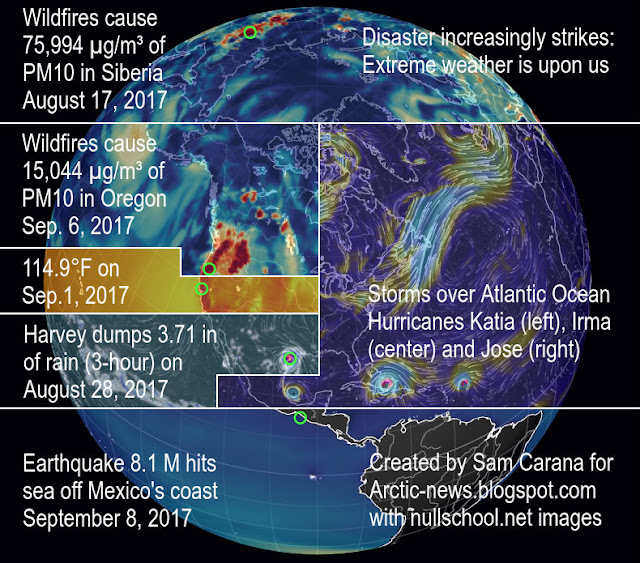 Extreme weather is upon us. Global warming is increasing the intensity, occurrence, size, duration and impact of many catastrophic events, including wildfires, droughts, heat waves, cold snaps, storms, lightning, flooding and seismic events such as earthquakes and associated tsunamis.

Ever larger numbers of people are getting hit directly by such events, as well as indirectly due to lack of fresh water, food, shelter, medicine, health care and emergency services.

Many lives were lost and many further lives are at stake. In a September 11, 2017, statement, AccuWeather predicts the joint economic costs of Hurricane Harvey and Hurricane Irma to be $290 billion, or 1.5% of the U.S. GDP.

The following three images show Hurricane Irma (left) and Hurricane Jose (right), and are forecasts for September 10, 2017. The image directly below shows that waves are forecast to be as high as 48 ft (or 14.63 m).

Forecasts were posted widely, such as the image below that was posted at facebook.

Earlier, Hurricane Harvey hit Houston. Again, warnings were posted widely, such as the forecast below, posted at facebook.

There is no doubt that people's emissions are causing global warming and that this is causing more extreme weather to occur across the world.

Extreme weather is amplified by changes to the Jet Streams. As the Arctic is warming more rapidly than the rest of the world, the temperature difference between the Arctic and the Equator is narrowing, which is slowing down the speed at which the Jet Streams circumnavigate the globe.

The Coriolis Effect makes Jet Streams circumnavigate the globe horizontally, and this used to keep cold air inside the Arctic and warmer air outside of the Arctic.

As the Jet Streams circumnavigate the globe at lower speeds, they increasingly move more vertically, allowing cold air from the Arctic to move down south more easily, and warm air to move up north more easily. This can make it easier for cyclones to move land-inward, where they previously would have kept following a path over the sea. This can also make it easier for weather conditions to stay the same for many days in an area, allowing huge amounts of rain water to accumulate in such an area. 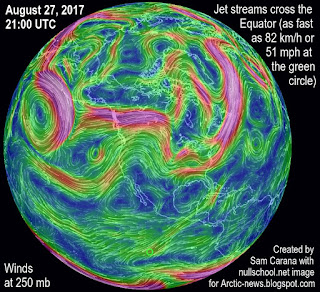 Furthermore, numerous cyclones are visible on the image. As Earth retains more energy, winds and currents are getting stronger, waves are getting higher, etc., while higher temperatures are also causing winds to carry more moisture. This is especially the case for cyclones that are also stronger due to high sea surface temperatures.

The image below shows Hurricanes Jose, Irma and Katia lining up over the Atlantic Ocean on September 7, 2017. 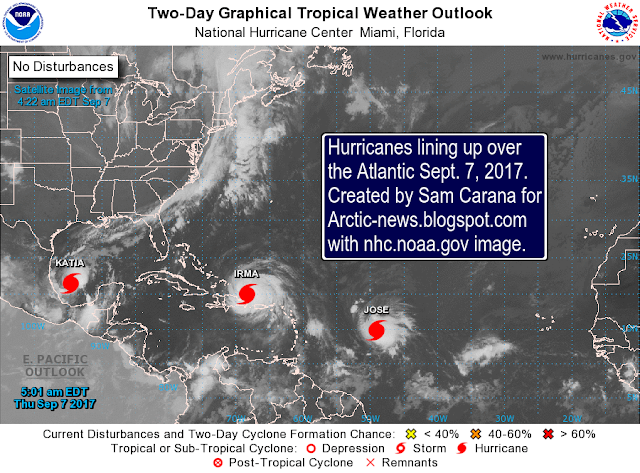 The image below shows the hurricanes lining up over the Atlantic Ocean on September 8, 2017. 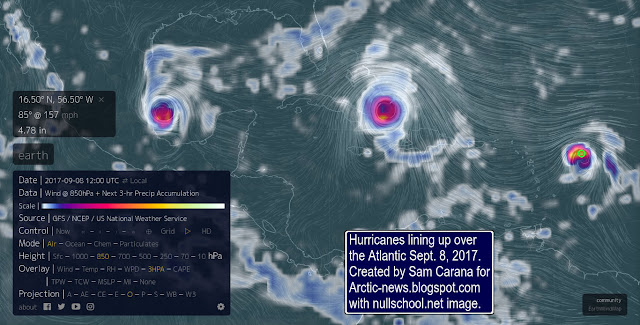 The image below shows Hurricane Jose off the coast of North America and Hurricane Maria underneath, with winds as fast as 149 mph or 241 km/h (at 850 hPa) and as much as 7.92 inch or 201.1 mm of rain (3-hour precipitation accumulation) at the location marked by the green circle. 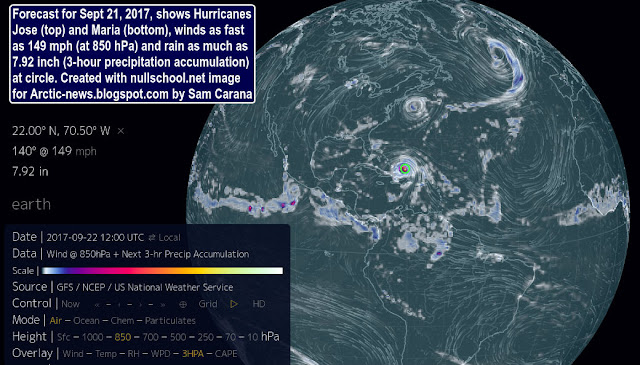 In the video below, Paul Beckwith discusses the situation.


There can be many interactions between such events. Seismic events such as earthquakes, landslides and associated tsunamis, can be triggered by human activities in several ways.
After Sandy hit New York, in 2012, earthquakes hit the coast off Vancouver and links between the two events were discussed in this post. 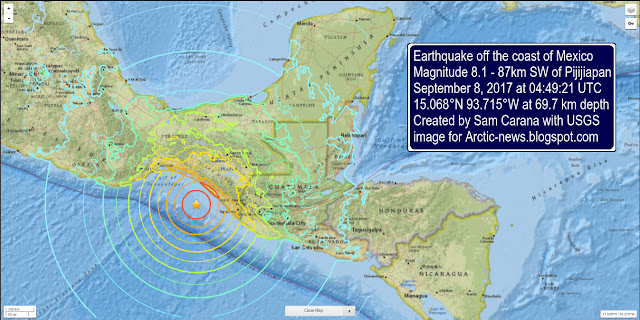 Numerous aftershocks are visible on the map below (screenshot taken September 13, 2017). 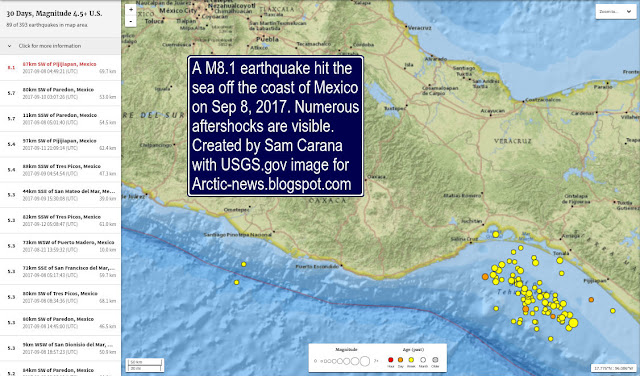 Rising temperatures are increasing the amount of water vapor in the atmosphere at a rate of 7% more water vapor for every 1°C warming. This is further speeding up warming, since water vapor is a potent greenhouse gas. Over the coming years, a huge amount of additional water vapor threatens to enter the atmosphere, due to the warming caused by albedo changes in the Arctic, methane releases from the seafloor, etc., as described at this page.

• How much warming did and could people cause?
https://arctic-news.blogspot.com/p/how-much-warming-did.html