The image below illustrates how much and how fast oceans are warming on the Northern Hemisphere. 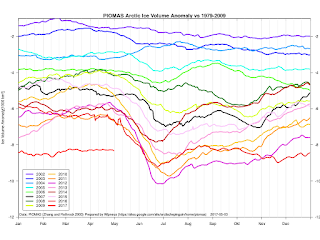 As ocean warming continues, prospects for the sea ice in the Arctic are grim.

Warmer water is melting the sea ice from below. The image on the right shows ever less sea ice volume in the Arctic, reflecting huge thinning of the sea ice over the years.

As the sea ice gets thinner, it becomes ever more prone to break up in pieces that will melt quicker (as more surface area becomes exposed to heat from the atmosphere and heat from the water).

Moreover, with more open water, stronger waves and winds can develop, increasing the chances that sea ice will melt and get pushed out of the Arctic Ocean.

El Niño looks set to strike again this year and the Arctic looks set to be hit much stronger than the rest of the world, as illustrated by the image on the right. The images below show updated indications for El Niño 2017.


Above on the right is a NOAA animation showing a Kelvin Wave forming in the Equatorial Pacific. The image on the left is the most recent frame from this animation.

In other words, temperatures in 2017 look set to be very high, which spells bad news for the Arctic where temperature anomalies are already several times higher than in the rest of the world. 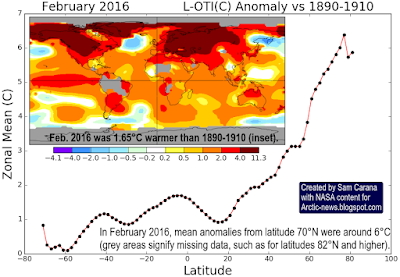 Anomalies in the Arctic were even higher. As the main image on the right shows, it was around 6°C warmer at latitudes north of 70°N.

Note that insufficient data were available to include latitudes north of 85°N in the analysis, as also indicated by the grey areas on the image. 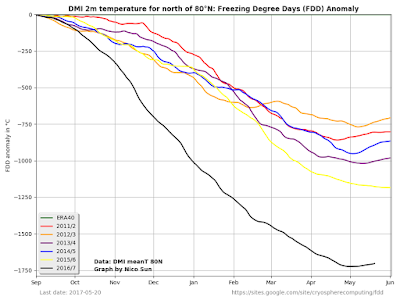 To get  an idea of the situation north of latitude 80°N, have a look at the image on the right, by Nico Sun, showing freezing degree days anomaly over the years, compared to the 1958 - 2002 mean temperature.

Warming looks set to strike the Arctic even harder and high levels of greenhouse gases over the Arctic are contributing to this.

The Scripps image below illustrates this, showing that carbon dioxide levels at Mauna Loa are now well above 410 ppm. 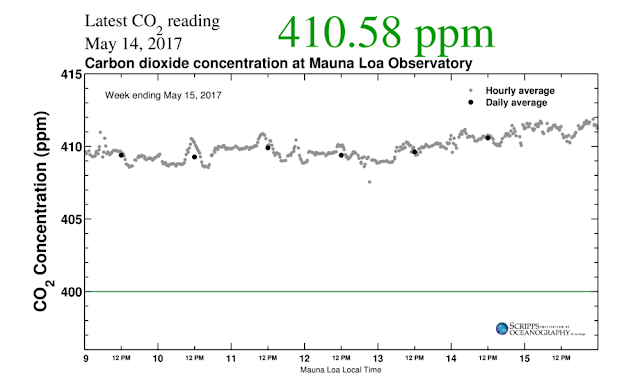 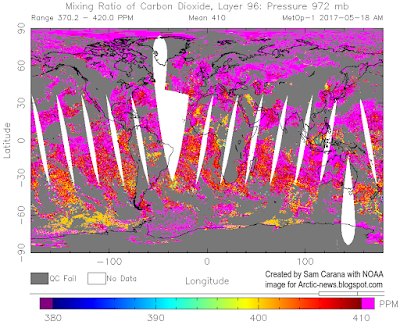 The image on the right shows carbon dioxide levels on May 18, 2017. The color indicates that the highest levels were present over the Arctic.

There is a huge danger that temperatures will accelerate very rapidly in the Arctic, as self-reinforcing feedbacks are starting to kick in with greater force.

This applies in particular to feedbacks associated with loss of snow and ice cover in the Arctic and to methane releases from clathrates contained in sediments at the seafloor of the Arctic Ocean.

The latter danger is also illustrated by the images below, showing the (lack of) sea ice in the ESAS and the Bering Strait. The image underneath shows the temperature anomaly of water.

In conclusion, the situation is dire and calls for comprehensive and effective action, as described in the Climate Plan.