Accelerating Warming of the Arctic Ocean 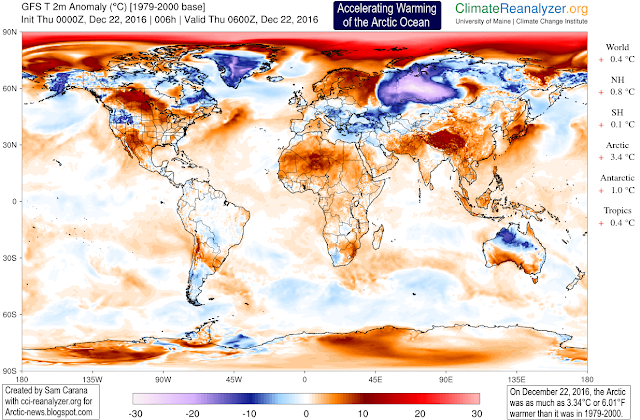 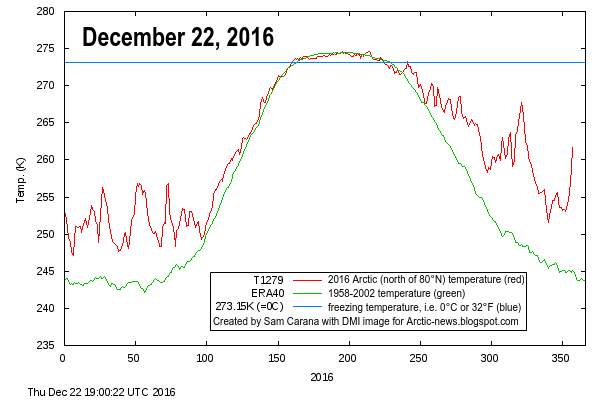 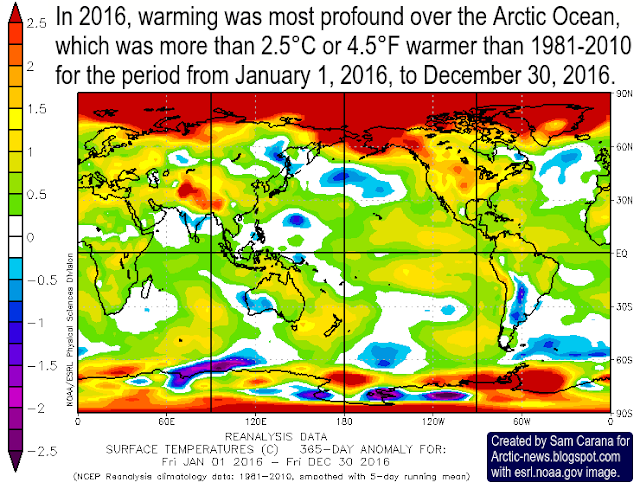 The animation below illustrates how this anomaly developed over the past few years, each time showing a 365-day period, starting in 2014 and each time shifted by roughly one month. 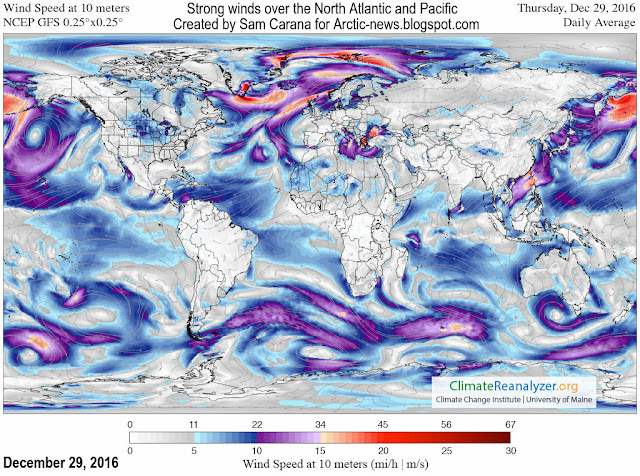 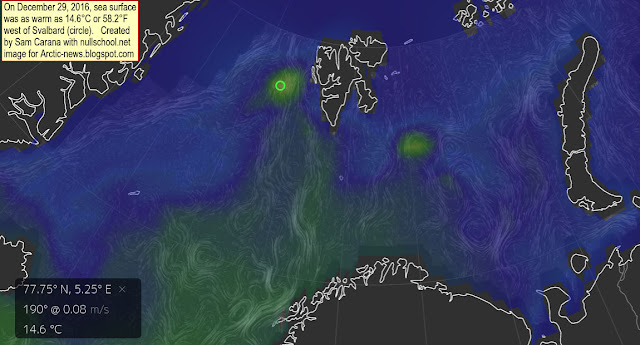 Underneath the surface of the North Atlantic, the water is much warmer than at the surface, and this temperature difference increases as winds get stronger and cause stronger evaporation, which has a cooling effect on the sea surface. This is illustrated by the image below, showing both the North Pacific and the North Atlantic on November 28, 2016.

The image below, from an earlier post,  shows the depth of Barents Sea, which is relatively shallow around Svalbard. 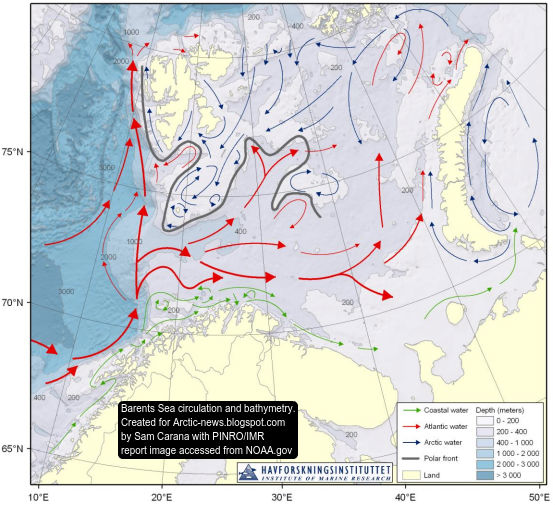 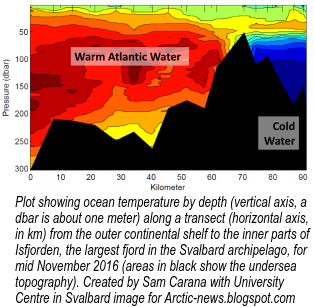 As the image on the right shows, this spot warms up due to a sea current that brings warm water from the North Atlantic into the Arctic Ocean.

Above images give an indication of the temperature of the water in the Atlantic Ocean underneath the sea surface, as the water comes to the surface near Svalbard, as also illustrated by the plot on the right.

The Arctic Ocean is now warming underneath the sea ice due to the inflow of warm water from the Atlantic Ocean and the Pacific Ocean.

The Arctic Ocean is also warming due to feedbacks such as increased levels of water vapor in the atmosphere, warmer river water running into the Arctic Ocean and soot from wildfires that can settle on snow and ice, resulting in further albedo changes.

Further feedbacks of global warming include warmer air temperatures, higher waves and stronger winds that all speed up the demise of snow and ice.

Stronger winds are pushing warm water from the North Atlantic into the Arctic Ocean. Why are these winds getting stronger? As the Arctic warms faster than the rest of the world, the temperature difference between the Arctic and the Equator decreases, making the Jet Stream wavier, with longer loops extending to the north and to the south. At the same time, the temperature difference between the oceans and the continents (Europe, Asia and North America) is increasing, speeding up the Jet Stream as it travels, e.g., over the North Atlantic towards the Arctic Ocean.

The situation is further illustrated by the video below, showing winds over the North Atlantic from December 27, 2016 to January 3, 2017, as forecasts by cci-reanalyzer.org. 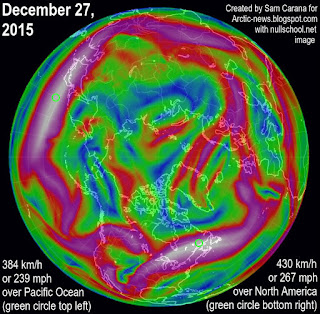 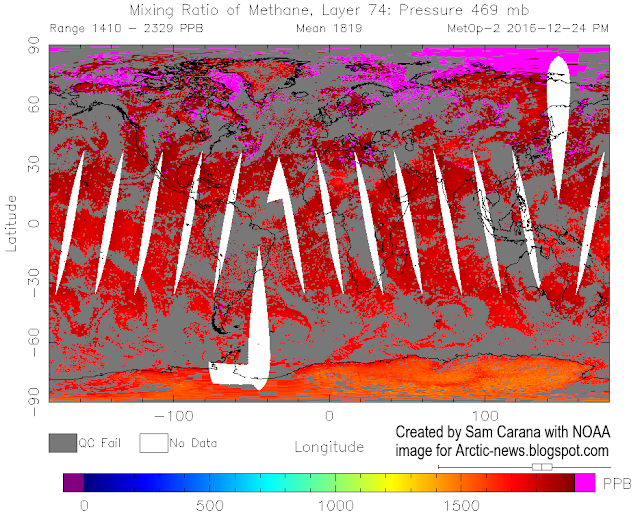 The danger is illustrated by the two images above and below, recorded by the MetOp2 satellite on the afternoon of Christmas eve and Christmas. 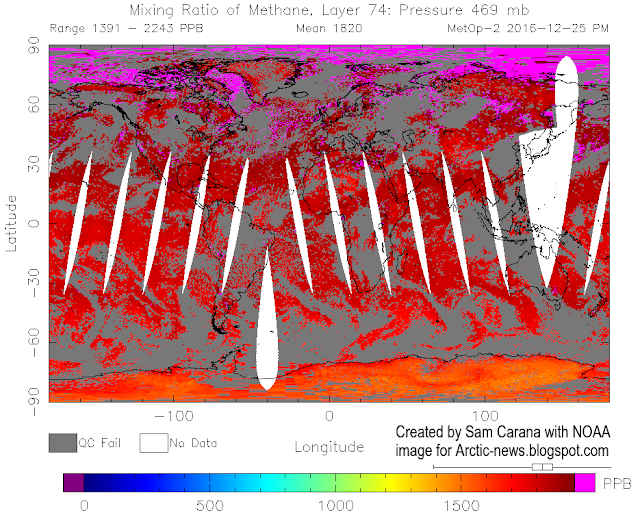 
The image below shows the associated temperature rise from preindustrial to 2026, with figures discussed in more detail on the Temperature page.

Two videos complement this. Have a look at the video entitled Abrupt Climate Disrupting Arctic Changes: Part 2 of 2 by Paul Beckwith, in particular the segment from 8:30 to 12:00 minutes where Paul discusses how wind patterns are changing over the Arctic.


For further thoughts on the situation, also have a look at the video below in which Jennifer Hynes interviews Peter Wadhams.