Arctic sea ice extent and especially concentration are now growing rapidly, as illustrated by the Naval Research Lab animation on the right.

This means that the sea ice is effectively sealing off the water of the Arctic Ocean from the atmosphere, reducing the chances of transfer of ocean heat from the water to the atmosphere. Conversely, the risk grows that ocean heat will reach the seafloor.

Furthermore, this seal makes that less moisture evaporates from the water, which together with the change of seasons results in lower hydroxyl levels at the higher latitudes of the Northern Hemisphere, in turn resulting in less methane being broken down in the atmosphere over the Arctic. 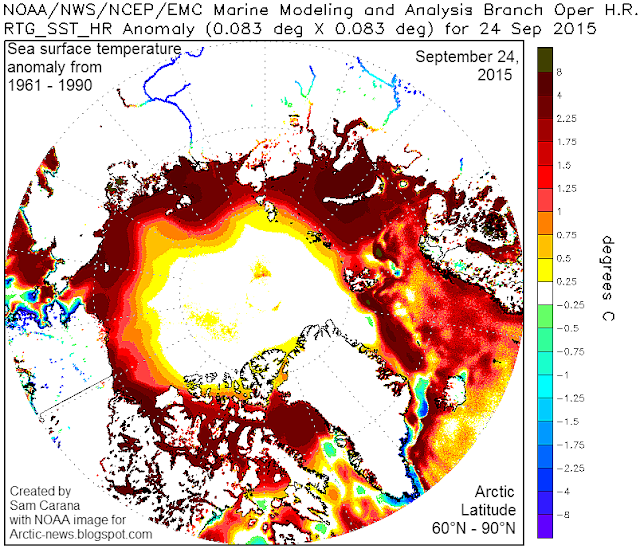 Water temperatures are very high in the Arctic. Above image shows Arctic sea surface temperature anomalies as at September 24, 2015. The risk of ocean heat reaching the Arctic Ocean seafloor has increased significantly over the years, due to rising ocean heat, as illustrated by the graph below, showing August sea surface temperature anomalies on the Northern Hemisphere over the years.
Ocean heat is increasing because people's emissions are making the planet warmer and more than 93% of the extra heat goes into the oceans.

Ocean temperatures have been measured for a long time. Reliable records go back to at least 1880. Ever since records began, the oceans were colder than they are now. Back in history, there may have been higher temperature peaks - the last time when it was warmer than today, during the Eemian Period, peak temperature was a few tenths of a degree higher than today. In many ways, however, the situation now already looks worse than it was in the Eemian. "The warm Atlantic surface current was weaker in the high latitude during the Eemian than today", says Henning Bauch. Furthermore, carbon dioxide levels during the Eemian were well under 300 ppm. So, there could well have been more pronounced seasonal differences then, i.e. colder winters that made that the average ocean temperature didn't rise very much, despite high air temperature in summer. By contrast, today's high greenhouse levels make Earth look set for a strong ocean temperature rise.

And indeed, this is illustrated by above image, showing a polynomial trendline that points at a rise of almost 2°C by 2030. This trendline is contained in ocean temperature data from 1880 for the August Northern Hemisphere sea surface temperature anomalies.

Note that the above ocean temperature graph and the above video only show sea surface temperatures. Underneath the surface, water can be even warmer. The Gulf Stream reaches its maximum temperatures off the North American coast in July. It can take some four months for this heat to travel along the Gulf Coast and reach destinations farther in the Arctic Ocean. Water warmed up off Florida in July may only reach waters beyond Svalbard by October or November.
The image below shows that on August 22, 2015, at a location near Florida marked by the green circle, sea surface temperatures were as high as 33.4°C (92.1°F), an anomaly of 3.8°C (6.8°F). 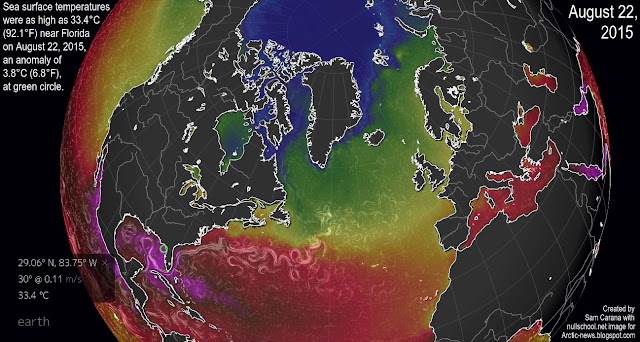 The image below shows sea surface temperatures on August 22, 2015, as an indication of the huge amount of ocean heat has accumulated in the Atlantic Ocean off the coast of North America. 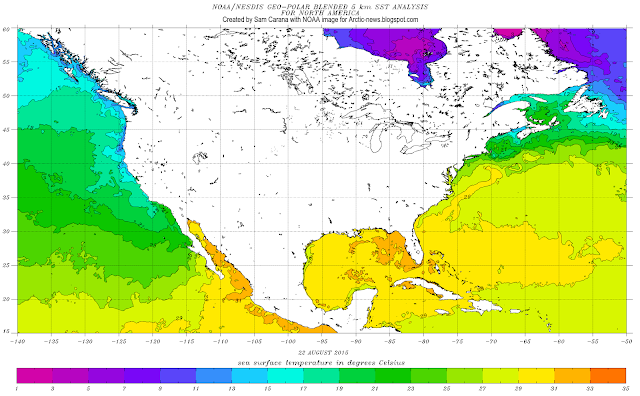 The huge amounts of energy entering the oceans translate into higher temperatures of the water and of the air over the water, as well as higher waves and stronger winds. 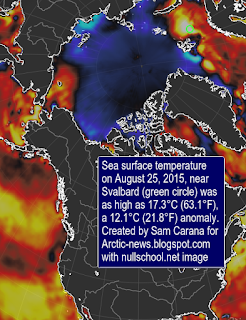 The Gulf Stream keeps pushing much of this very warm water north, into the Arctic Ocean, where it threatens to unleash huge methane eruptions from the Arctic Ocean seafloor.

The combination image below shows the Gulf stream carrying warm water from the coast of North America into the Arctic Ocean on September 12, 2015, and sea surface reaching temperatures as high as 14.6°C (58.3°F) that day at a location near Svalbard (marked by green circle), an 9.8°C (17.6°F) anomaly 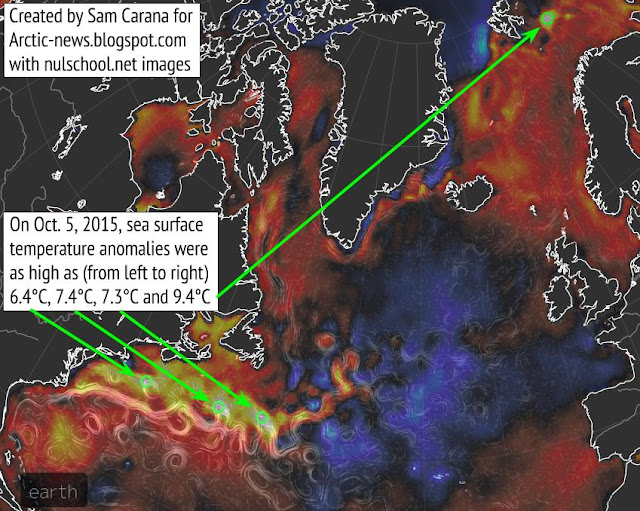 Speed of surface water was as high as 1.6 m/s (3.6 mph) on October 5, 2015. This wasn't as high as some of the speeds reached earlier in the year (a speed of 2.16 m/s or 4.7 mph was recorded on August 15, 2015), but it does indicate how strong the Gulf Stream still is at this time of year. Water speed slows down as the Gulf Stream progresses toward the Arctic Ocean. While speeds as high as 0.22 m/s and 0.24 m/s (0.5 mph) were recorded near Svalbard and Norway, overall speed was a lot lower in this part of the Atlantic.

What is making the situation worse is depicted in the images below. From 2012, huge amounts of freshwater have run off Greenland, with the accumulated freshwater now covering a huge part of the North Atlantic, as illustrated by the image below.

Since it's freshwater that is now covering a large part of the surface of the North Atlantic, it will not easily sink in the very salty water that was already there. The water in the North Atlantic was very salty due to the high evaporation, which was in turn due to high temperatures and strong winds and currents. As said, freshwater tends to stay on top of more salty water, even though the temperature of the freshwater is low, which makes this water more dense. The result of this stratification is less evaporation in the North Atlantic, and less transfer of ocean heat to the atmosphere, and thus lower air temperatures than would have been the case without this colder surface water.

As meltwater accumulates at the surface of the North Atlantic, will it slow down the Gulf Stream?

More elongated curves and eddies forming where the meltwater meets the Gulf Stream appears to make that it will indeed take longer for surface water to travel from the coast of North America to the Arctic Ocean. However, the speed reached within such eddies may actually be higher. After all, the amount of extra heat that enters the oceans keeps growing and this extra energy will likely translate into warmer water carried in greater volumes and at higher speed by the Gulf Stream underneath the surface of the North Atlantic into the Arctic Ocean, be it that the more curved patterns of the currents will increase the overall time it takes for water to travel the distance, especially at the surface.

Importantly, as global warming continues to heat up the oceans, the accumulated freshwater at the surface of the North Atlantic makes that less ocean heat can be transferred from the water to the atmosphere there, i.e. the freshwater is acting like a lid. Similarly, the Arctic sea ice is acting as a seal over the Arctic Ocean, as seasons change. In conclusion, the highest temperatures of the water of the Arctic Ocean, especially at greater depth, are yet to be reached this year. 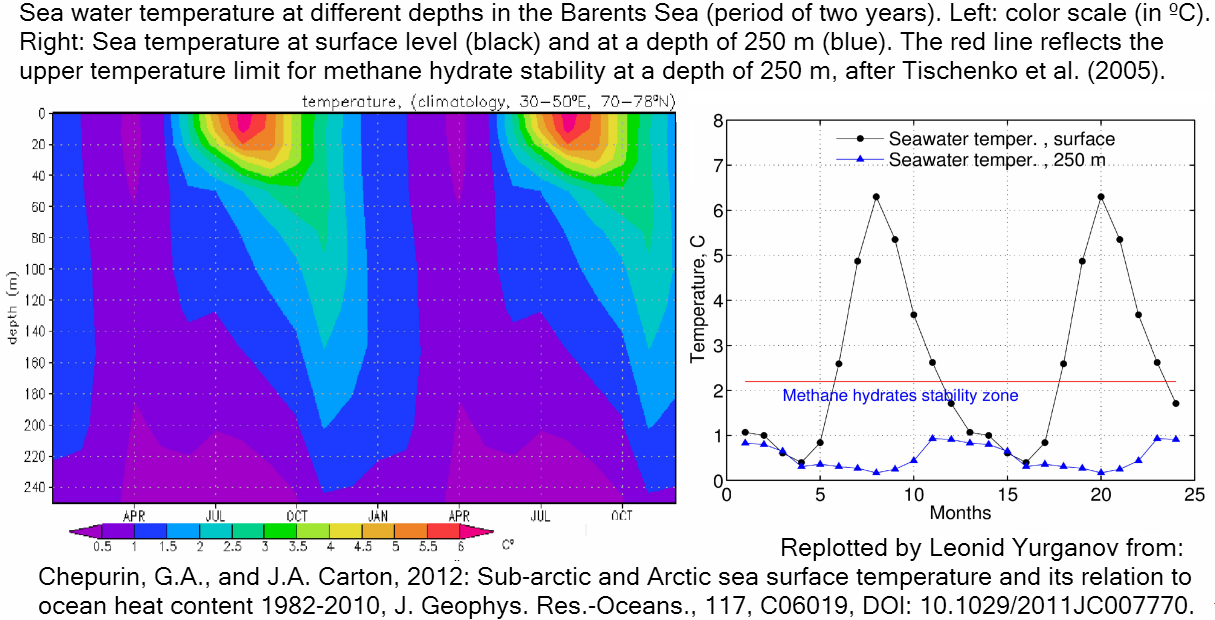 In the Arctic Ocean, this more salty newly-arriving warm water will tend to dive under the freshwater that has formed from the melting of sea ice over the past few months. The danger is thus that warmer water will be pushed into the Arctic Ocean at lower depth, and that it will reach the seafloor of the Arctic Ocean.
Huge amounts of methane are contained in sediments on the Arctic Ocean seafloor. Ice acts like a glue, holding these sediments together and preventing destabilization of methane hydrates.
Warmer water reaching these sediments can penetrate them by traveling down cracks and fractures in the sediments, and reach the hydrates. The image on the right, from a study by Hovland et al., shows that hydrates can exist at the end of conduits in the sediment, formed when methane did escape from such hydrates in the past. Heat can travel down such conduits relatively fast, warming up the hydrates and destabilizing them in the process, which can result in huge abrupt releases of methane.

Heat can penetrate cracks and conduits in the seafloor, destabilizing methane held in hydrates and in the form of free gas in the sediments.
Elsewhere, methane hydrates will typically be located at great depth, making it more difficult for ocean heat to reach them. In the Arctic, much of the water is very shallow. The East Siberian Arctic Shelf (ESAS) is on average only 50 m deep, making it easier for heat to reach the seafloor and also making that methane that escapes will have to travel through less water, reducing the chances that methane will be broken down by microbes on the way up through the water. Furthermore, hydroxyl levels are very low over the Arctic, making that the methane will not quickly be broken down in the atmosphere over the Arctic either.
The big melt in Greenland and the Arctic in general is causing further problems. Isostatic adjustment following melting can contribute to seismic events such as earthquakes, shockwaves and landslides that can destabilize methane hydrates contained in sediments on the Arctic Ocean seafloor. 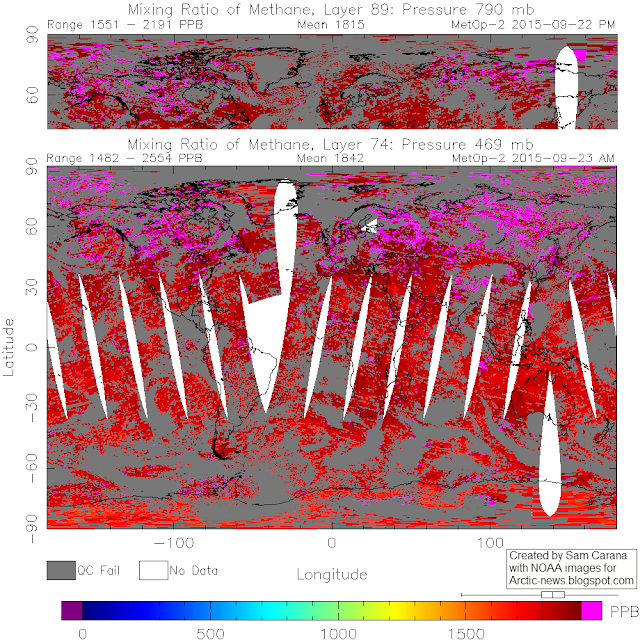 Above image shows methane levels as high as 2554 parts per billion, on the morning of September 23, 2015, in the bottom panel, and strong methane releases over the ESAS, as indicated by the solid magenta-colored areas in the top panel, on the afternoon of the previous day at lower altitude. These are indications of methane releases from the seafloor of the Arctic Ocean. Strong winds over the ESAS, as the image below shows, may have contributed, by mixing warm water down to the seafloor. 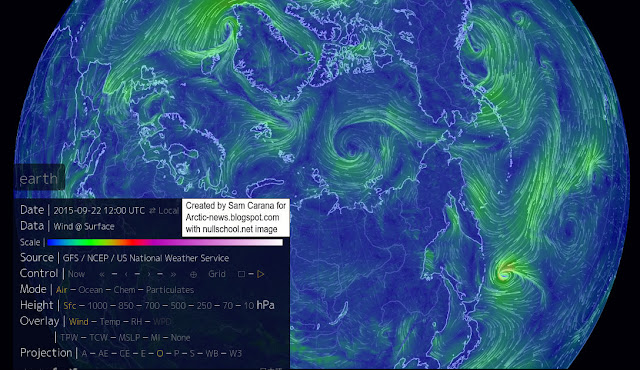 On the morning of September 25, 2015, methane reached levels as high as 2629 ppb, while mean global level reached a record high 1846 ppb. The video below, created with Climate Reanalyzer images,  shows strong winds over the Arctic for the period September 26 to October 3, 2015.

NOAA data show that the year-to-date land surface temperature in July was 1.47°C above the 20thcentury average on the Northern Hemisphere in 2015. A polynomial trendline based on these data points at yet another degree Celsius rise by 2030, on top of the current level, which could make it 3.27°C warmer than in 1750 for most people on Earth by the year 2030, as illustrated by the image below.
The image below shows a non-linear trend that is contained in the temperature data that NASA has gathered over the years, as described in an earlier post. A polynomial trendline points at global temperature anomalies of over 4°C by 2060. Even worse, a polynomial trend for the Arctic shows temperature anomalies of over 4°C by 2020, 6°C by 2030 and 15°C by 2050, threatening to cause major feedbacks to kick in, including albedo changes and methane releases that will trigger runaway global warming that looks set to eventually catch up with accelerated warming in the Arctic and result in global temperature anomalies of 16°C by 2052.
The situation is dire and calls for comprehensive and effective action, as discussed at the Climate Plan.

In the Arctic Ocean, the more salty newly-arriving warm water will tend to dive under the freshwater that has formed...
Posted by Sam Carana on Friday, September 25, 2015