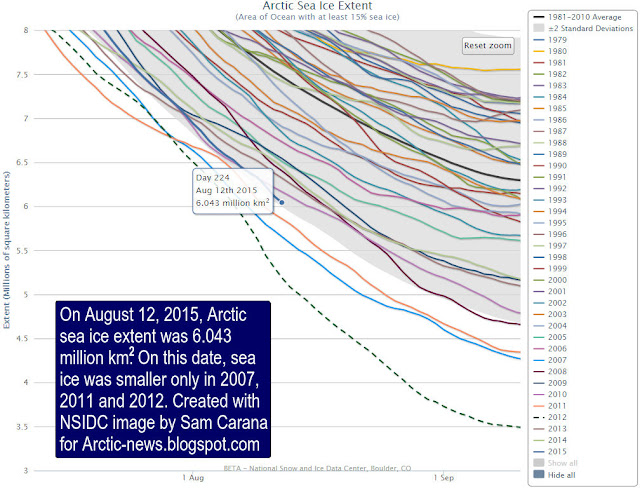 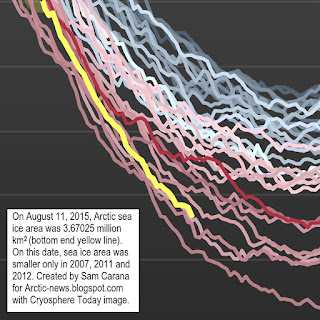 Similarly, on August 11, 2015, Arctic sea ice area on August 11, 2015, was 3.67025 million square km (bottom end yellow line). For this date, the only years on record that sea ice area was smaller were 2007, 2011 and 2012.
So, will Arctic sea ice reach a record low this year? The situation is actually a lot worse than it appears when just looking at sea ice extent and area up until now.
In fact, sea ice is in a horrible state. One indication of this is the almost complete absence of thick sea ice on August 12, 2015, which becomes even more clear when compared with the situation in 2012 for the same date, as illustrated by the image below.
The absence of thick sea ice means that, in terms of volume, there is very little sea ice left to melt until the minimum volume will be reached around half September. In other words, the remaining sea ice could melt rather quickly.

Also note the presence of water on the image below, from Web Cam 1, from the North Pole Environmental Observatory, National Science Foundation. For a drift map of the buoys, also see this page. 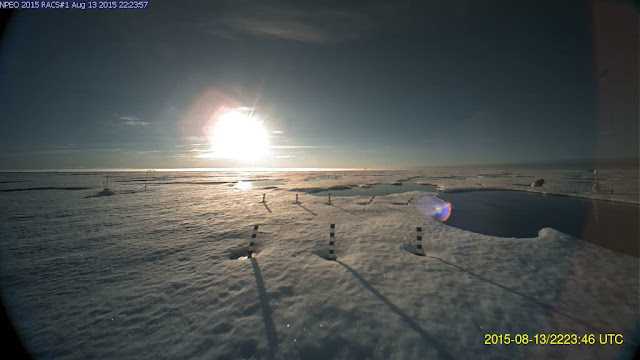 The image below shows sea surface temperature anomalies in the Arctic on August 13, 2015. 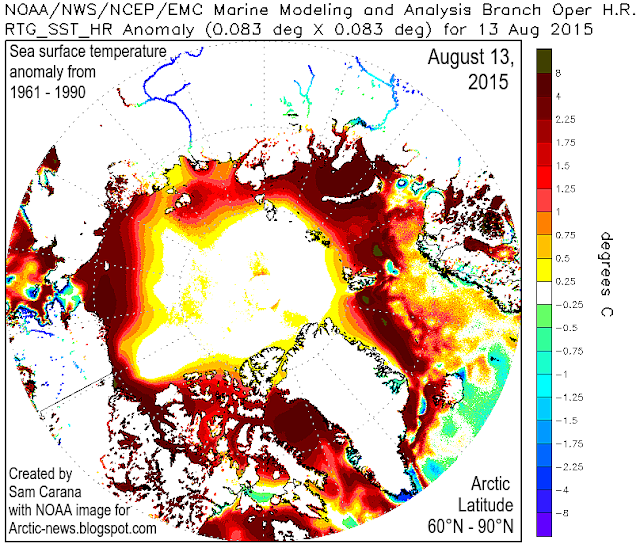 As discussed earlier, Greenland's dramatic losses of ice mass over the past few years and the subsequent large volumes of meltwater have affected sea surface temperatures in the North Atlantic and have caused the sea ice to be larger than it would otherwise have been in terms of extent and area.

Nonetheless, this has not halted the overall rise of ocean heat and the subsequent decline of Arctic sea ice, as illustrated by the discussion further above on sea ice thickness. Thick sea ice is shattered if not absent altogether in many places.
Until now, the thicker multi-year sea ice used to survive the melting season, giving the sea ice strength for the next year, by acting as a buffer to absorb heat that would otherwise melt away the thinner ice. Without multi-year sea ice, the Arctic will be in a bad shape in coming years. Absence of thick sea ice makes it more prone to collapse, and this raises the question whether a collapse could occur not merely some years from now, but even this year.
Meanwhile, ocean heat is at a record high and there's an El Nino that's still gaining strength. The image below illustrates that a huge amount of ocean heat has been piling up in the Atlantic Ocean, ready to be carried into the Arctic Ocean, while large amounts of heat are also entering the Arctic Ocean from the Pacific Ocean through  the Bering Strait.
This ocean heat is likely to reach the Arctic Ocean in full strength by October 2015, at a time when sea ice may still be at its minimum. Absence of sea ice goes hand in hand with opportunities for storms to develop over the Arctic Ocean, which could mix surface heat all the way down to the seafloor, where methane could be contained in sediments.
The methane situation is already very dangerous, given mean methane levels that recently reached levels as high as 1840 ppb, while much higher peak levels can occur locally, as illustrated by the image below. 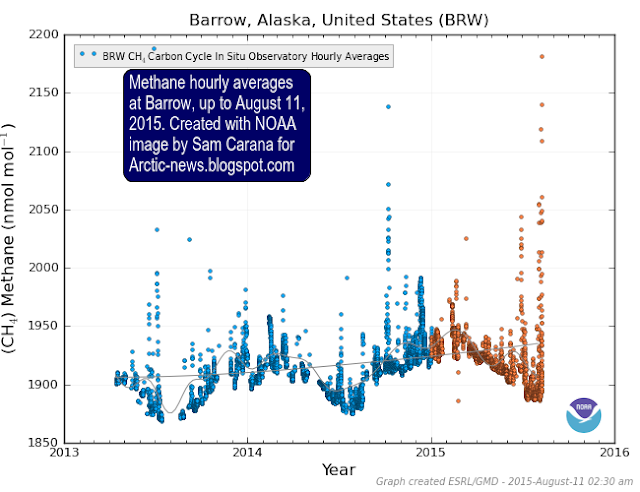 Methane levels appear to be rising by over 10 parts per billion a year at Barrow, Alaska. Worryingly, high peaks have been showing up there recently.

In conclusion, Arctic sea ice looks set to take a further battering over the next few weeks and could end up at a record low around half September 2015. If things get really bad, sea ice collapse could occur and the remaining pieces of sea ice could be driven out of the Arctic Ocean altogether by storms, resulting in a blue ocean event as early as September this year.
The situation is dire and calls for comprehensive and effective action, as discussed at the Climate Plan.