As the comparison image below shows, the last bit of thick sea ice has become dislodged from its location in the Canadian Archipelago and is forecast to be floating along with the sea ice in the Arctic Ocean. The left panel shows the situation on July 19, 2015, while the right panel shows a forecast for July 31, 2015, run on July 23, 2015.

One reason for this development is of course the heavy melting that has taken place in this area. But what has made this thick sea ice move so strongly? The reason for this is a combination of wind, sea currents and meltwater running off the coasts of North America and Greenland. This has been persistently pushing this thick ice in this direction, as illustrated by the Naval Research Laboratory animation below.

The Naval Research Laboratory animation below shows sea ice thickness over a 30-day timespan, including a forecast up to 31 July, 2015, run July 23, 2015.

The screenshot below from arctic-io shows the sea ice on July 23, 2015, with an inset showing a rotated outcut from a Naval Research Laboratory ice thickness map for that date.
The animation below shows a 5-day forecast of ice speed and drift up to July 27, 2015, starting from and run on July 23, 2015.

Furthermore, there has been a lot of smoke from wildfires in North America for some time. The image below shows smoke reaching far into the Beaufort Sea on July 22, 2015. 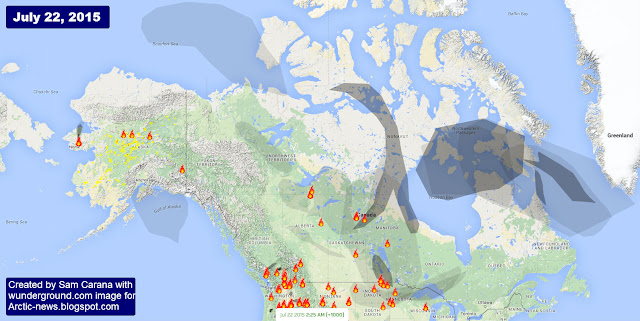 When smoke settles on snow and ice, it decreases albedo and makes it more prone to melting.

Seismic activity could also have contributed to this development. As the snow and ice cover on land disappears, isostatic rebound occurs, i.e. the land moves upward. Furthermore, an earthquake with a magnitude of 3.6 on the Richter scale was registered in Baffin Bay on July 22, 2015.

Above animation shows the last bit of thick sea ice becoming dislodged from its location in the Canadian Archipelago, from July 21, 2015, through to July 24, 2015. 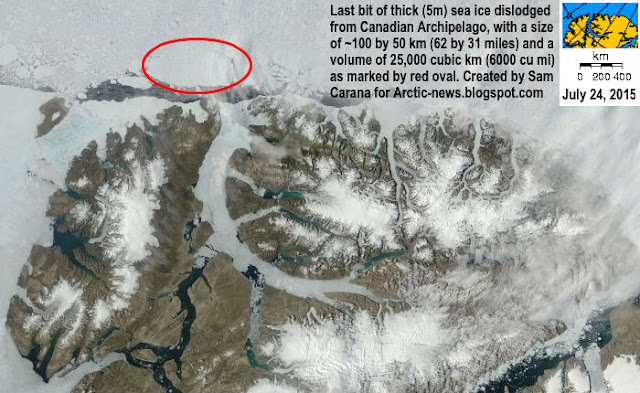 Albert Kallio comments: "The more ice moves, the more heat it can pick up from the ocean - and melt. Also, the overturning of sea water in the ocean increases in the increasingly open sea areas - bringing heat up to the surface - and into contact with ice that then melts faster."

[ hat tip to Patrick McNulty for contributions to this post ]

The last bit of thick sea ice has become dislodged from its location in the Canadian Archipelago and is forecast to be...
Posted by Sam Carana on Friday, July 24, 2015