Accelerated Warming in the Arctic


The image below shows that on June 27, 2015, temperatures of well over 40°C (104°F) were recorded in Europe and in Pakistan, where temperatures earlier this month had reached 49°C (120.2°F) in some places. The heat wave reportedly killed 1233 people in Karachi alone. This in addition to the 2500 people killed earlier in India by high temperatures.

High temperatures at such locations are very worrying, for a number of reasons, including:
The image below shows increased sea surface temperature anomalies in the Arctic. Note the warming in the area of the Beaufort Sea where the Mackenzie River is flowing into the Arctic Ocean. 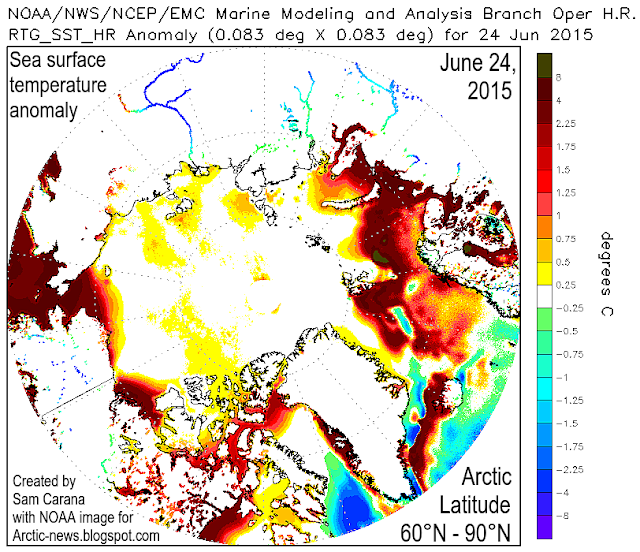 As said above, warm water flowing from rivers into the Arctic Ocean is a major contributor to these sea surface temperature anomalies. As also illustrated by the NOAA image below, rivers carrying warm water into the Bering Strait include the Kobuk River, the Naotak River and the Yukon River that flows all the way from British Columbia, Canada, through Alaska and ends in the Bering Strait. Sea surface temperatures near the coast of Alaska were as high as 19°C (66.2°F) from June 21-24, 2015.

Sea surface temperature anomalies in the Arctic. Note the warming in the area of the Beaufort Sea where the Mackenzie...
Posted by Sam Carana on Thursday, June 25, 2015